Meghalaya is a Sanskrit word that means ‘clouds abode’ and is undoubtedly the wettest place I have ever seen. I chose to visit Meghalaya in June during the monsoons because it is when the mountains come alive. Most of the days I spent here was either raining or misty and the mist was not merely fog but little particles of water flying. This means if you are riding a bike in the mist you will be wet to your underwear. This was the first time I was riding solo and even visiting an unknown place without Priya and this time I had no plans either.

I had booked the tickets just a few days back, following the weather forecasts. I rented the bike a day before arriving in Guwahati and had plenty of information about waterfalls. As soon as I arrived in Guwahati I headed for Life on wheels and they were very kind to get me on the road in an hour. I headed straight for Sohra from Guwahati around 11 in the morning.

The road to Sohra from Guwahati 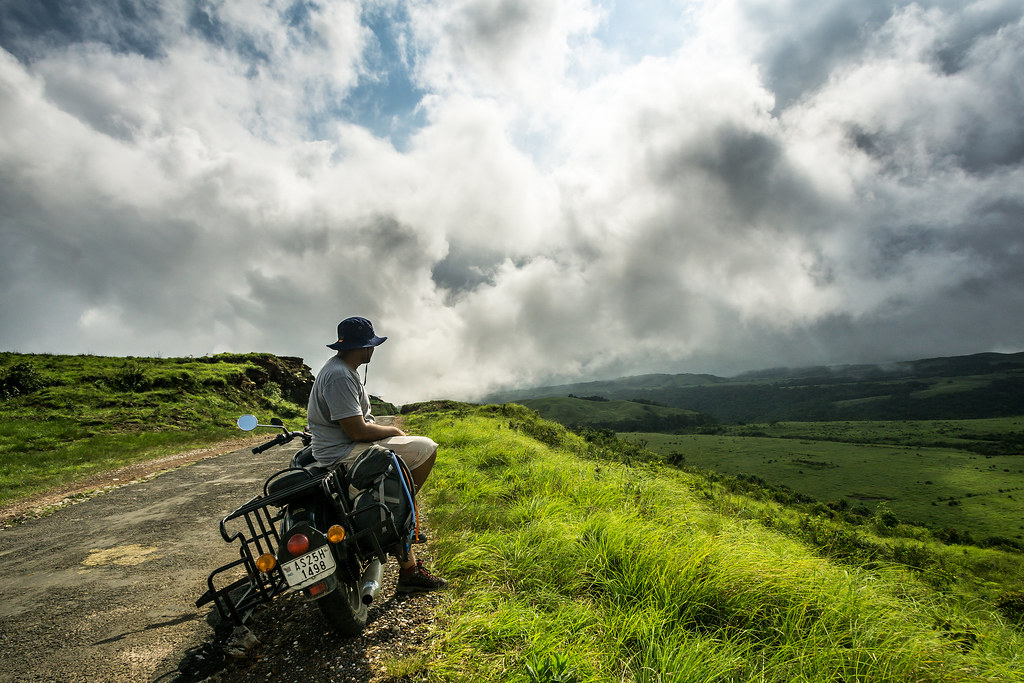 The road to Sohra from Guwahati is winding and beautiful. The roads in Guwahati were busy and took me an hour for 20 km to reach the toll road to enter Meghalaya. The roads in Meghalaya are awesome and the landscapes are even better. I made several halts on my way to absorb my excitement watching the clouds dance across the landscapes. Most of the way I was riding dry until Shillong, where it started drizzling. I rode through the rains until when it started pouring and I stopped at a shed. I met a guy and had a brief chat about the weather and it was when I realized that it wasn’t actually pouring but drizzling. It was raining heavily in Sohra and there could be floods according to the stranger I was talking to. So if this was drizzling, which was pretty heavy as per Delhi’s standards, thinking about the rains in Sohra got me chills. I calmed myself asking “isn’t this what I was here for?”. Thus, I made up my mind and I continued in the rains, straight to Sohra. It was raining pretty much the whole way and it stopped just a few kilometers from Sohra. Priya got worried from the news as the Government alarmed of floods in the region but that could not deter me. Last time when I was covering the waterfalls, it was in the south and during the dry season. And most of the waterfalls seemed dead and in no way I was going back without the falls this time.

Fell in love with Meghalaya on its first sight 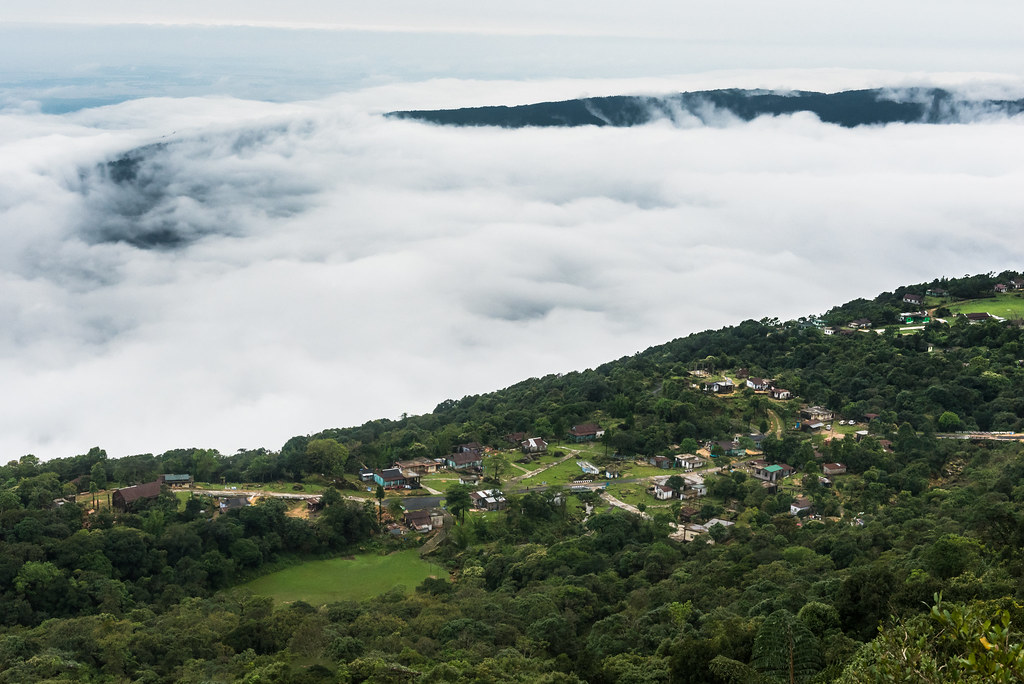 After Shillong, I noticed the mountains change shapes from hills to walls. The mountains no longer had slanting hill slopes as most of them do, but canyon like huge walls that had edges on the top. As this time it was wet everywhere it seemed like the mountains had come alive. The mountains were vibrantly green, clear and most of the big waterfalls simply vanished in the middle of the plunge. Waterfalls, streams, and clouds were a common sight and most of them were very hard to reach. I haven’t yet reached Sohra and the sight was mind-blowing. People are awesome and mostly keep to themselves. Most of the people here do not speak in Hindi but are fluent in English, thanks to the Christian missionaries. Cleanliness is in the culture of the Khasi people and is evident from their villages and markets. But it seems like they are yet to adapt to the beliefs of the people of the rest of India as most of the litter was due to the visitors.

Waterfalls are the jewels of Meghalaya 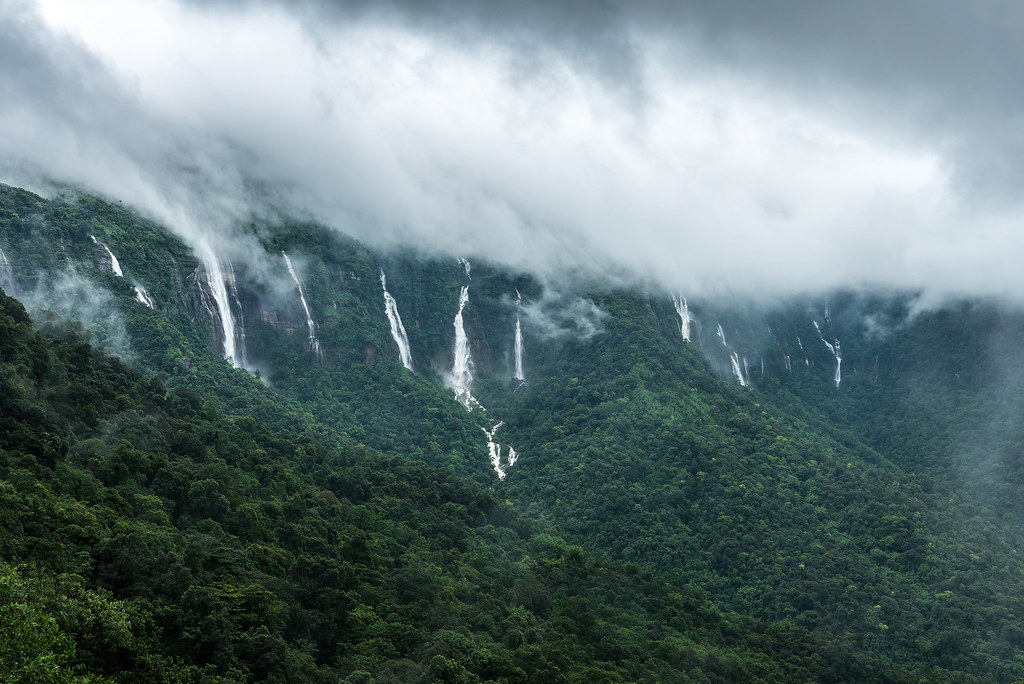 Meghalaya has all seasons in a year and the terrain changes accordingly. The lush green terrain changes spectacularly to yellow, brown and then black during the dry season. I could not believe it when someone in Genni’s Kitchen; where I had most of my meals, told me that during the dry season there is water scarcity and the terrain changes its colours. The best season to visit Meghalaya is the monsoons, it is unlike anywhere else in India. Most of the waterfalls come alive only during the wet season as they tend to run dry within a week without rains. It feels like the rains fill the region with life. A lot of them don’t even have names and most of them are not known to many locals either. 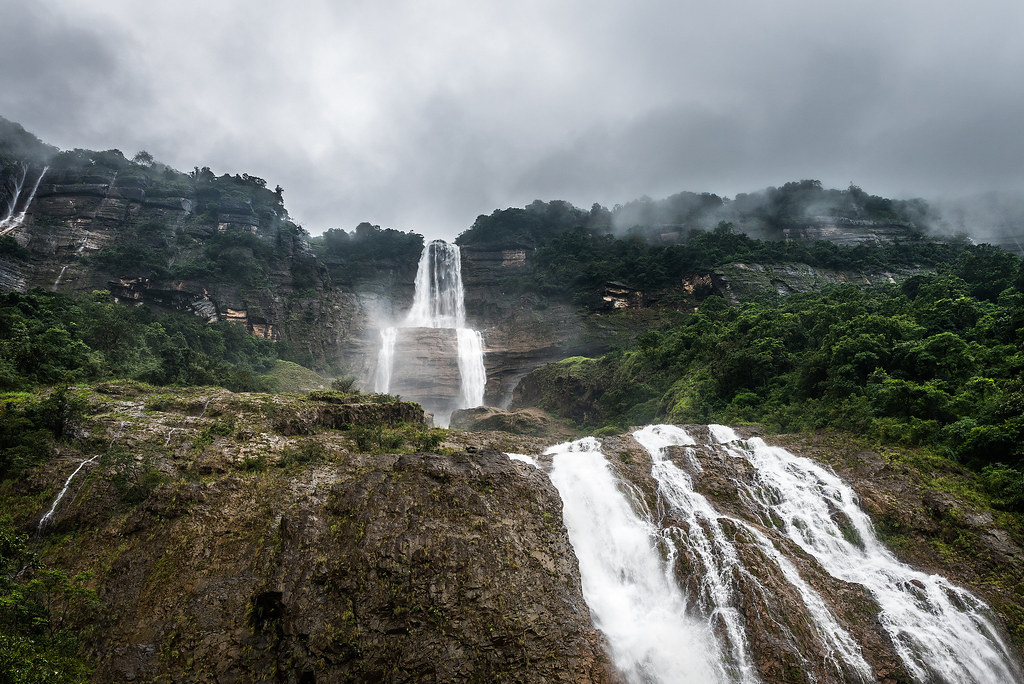 This is Kynrem falls and there is no proper road that leads here, at least not when I visited. Landslides are common along the way and it took out most of the road that was built. It rained pretty heavily the night before I took this picture. Only small cars or bikes could pass because of multiple landslides on the way. It’s about 20 kilometers from Sohra and takes an hour to reach. The waterfalls straight on a bridge that joins the roads over the stream and at times it floods it, closing the road for days. But I must say this was the mother of all waterfalls in Meghalaya. 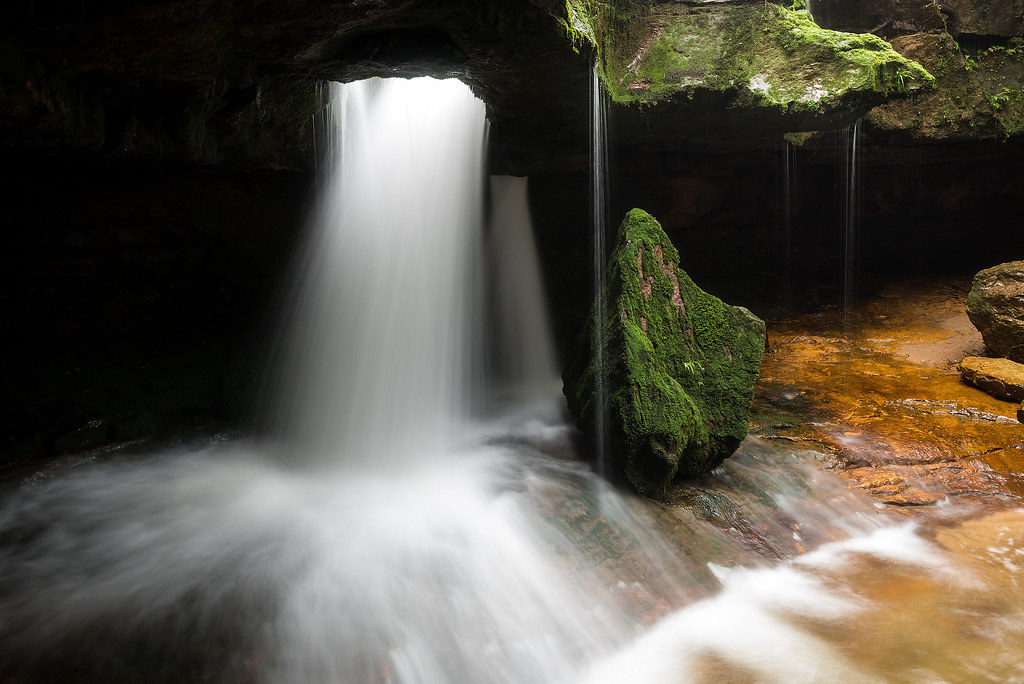 Not all waterfalls are known to everyone or even to the local operators or taxi drivers. This is because not all streams flow all year round to bring life to the falls. Most of the known falls that plunge from a height flows throughout the year. There’s a small village Laitmaisiang just before reaching Sohra from Guwahati that has built paths around the caves and a couple of beautiful waterfalls around the village. These caves were used by the Khasi to hide from the British. Now, these caves are filled with water and like the above one, the water flows straight through the roof. There are a couple of beautiful waterfalls in this area and it took me the whole day to cover all. 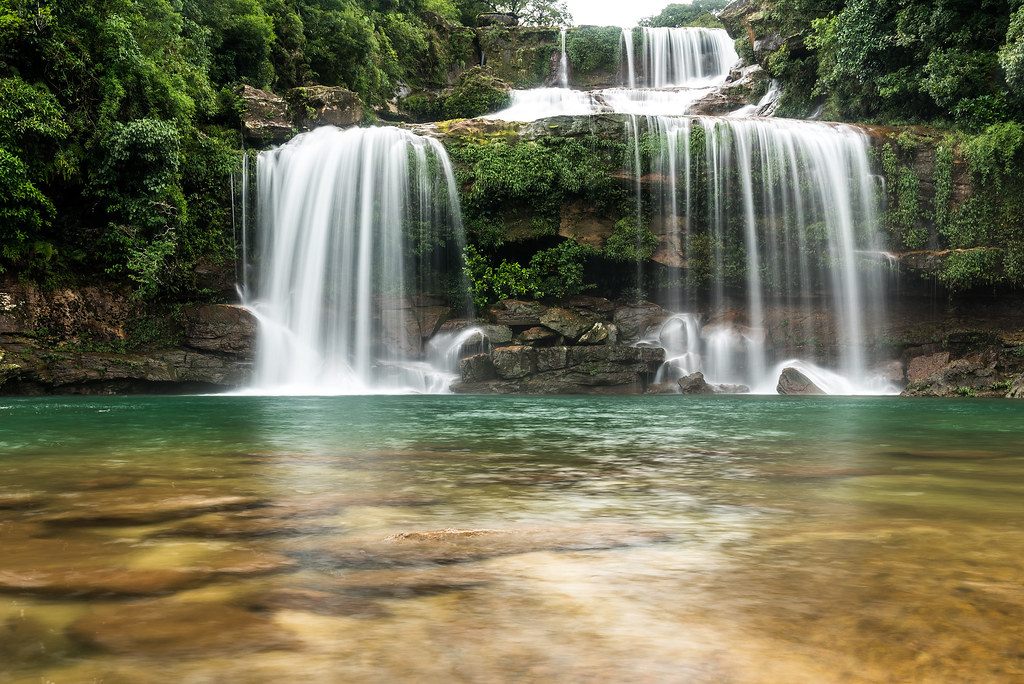 Lyngksiar is well hidden in the lush green grass lands of Sohra. It is a bit of a hike from the road that leads to the Denthlen falls. I had asked a couple of strangers from shop owners to bystanders about this place but nobody knew. It was only when my homestay owner asked one of his friends from around the area. His friend visits this place to fish snake heads during the monsoons. It was a nice day as we trailed the river that flows through Lyngksiar falls and ends at Denthlen falls. There are a couple of waterfalls on this stream in a few yards from each other. Mawasawa falls is another waterfall which has a majestic size. The falls were all in their full size and and roar. There will not be any better time to visit Meghalaya than the monsoons. If you plan to visit Meghalaya during the monsoons do not plan days before but keep watch on the weather forecasts and find a few days that would receive fewer rains to give you time to visit them. 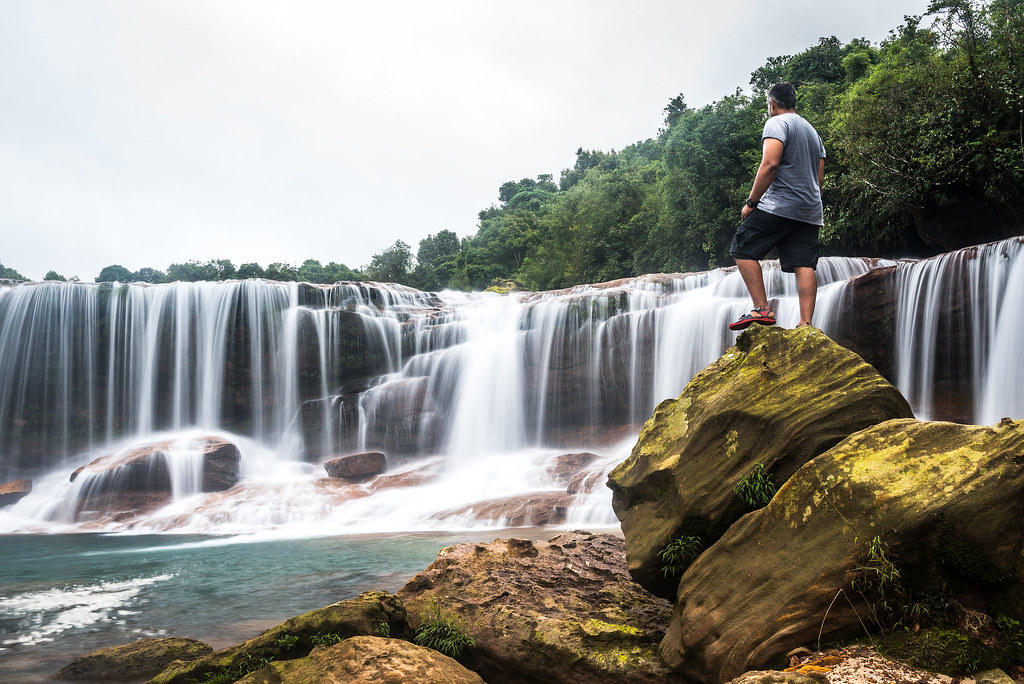