This is the second time we visited Bali and I wanted to see places without the people. Okay! that seems fake but I really wanted to visit the places when and where it is less crowded. Bali is a big island and most of us hardly make it out of Denpasar, the place where the international airport is.

But the island is home to a number of waterfalls that can be Googled and a lot more, that you won’t find about on Google. And most of them active during the monsoon or just after the monsoon. Not just waterfalls, it also houses an active volcano, Mount Batur but not as majestic as Bromo, several dive spots near small islands, beautiful rice terraces, white sand beaches, beaches with big tidal waves for surfing and ancient temples. And most of these places get crowded with international and local visitors. So how do we make it possible to visit the places without the crowd?

Visit a temple in Bali even before the devotees 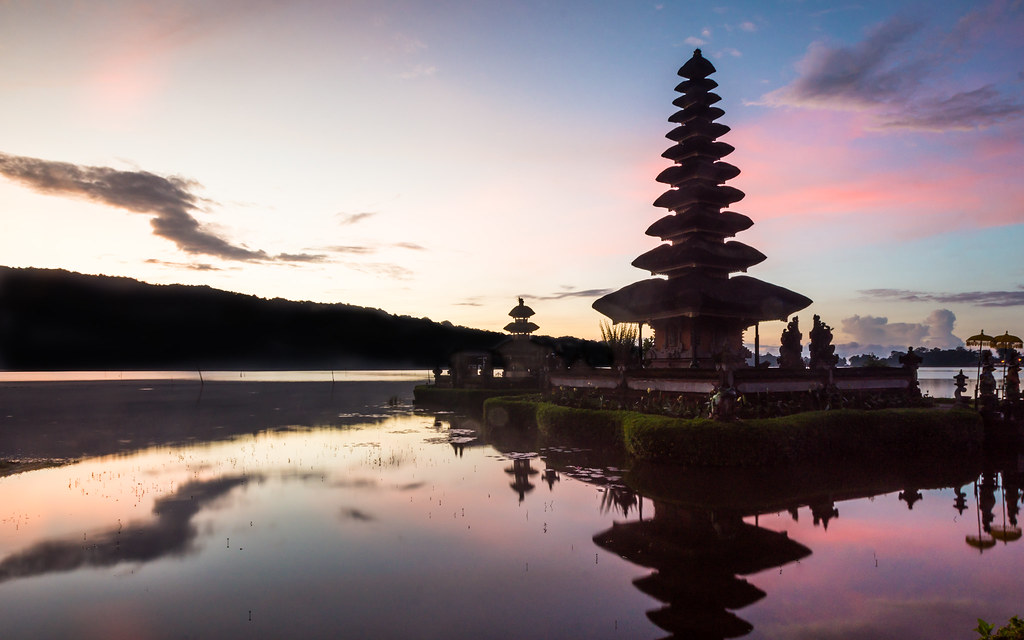 Last time when we visited Ulan Danu Beratan temple it was during the day and it was bustling with visitors. But this time we made it to the temple at 5 am. It wasn’t easy but not impossible either. The temple is around 2 hrs from Denpasar and may take up to 3 hours in traffic and is about 60 Kms. Renting cars, jeeps, scooters, ATV, bicycle and even helicopters is pretty easy in the city. We rented a scooter as it is pretty easy to maneuver in the traffic and is a lot cheaper than a car. But I could choose the scooter instead of the car only if we rolled early. 3 am was what Priya meant by early, that’s because she was pissed off by the idea of making the distance on a scooter and that too on a busy highway. But the highways aren’t like the Indian or western highways here. The roads are pretty narrow because of which there’s congestion. But to our surprise, the whole way to the temple was empty except two places where there were early morning vegetable market. The highways were so empty that it could have landed a few jet planes and we made it to the temple in just above an hour. Priya was pretty happy about it in spite of us leaving an hour late as I am pretty hard to be awakened. 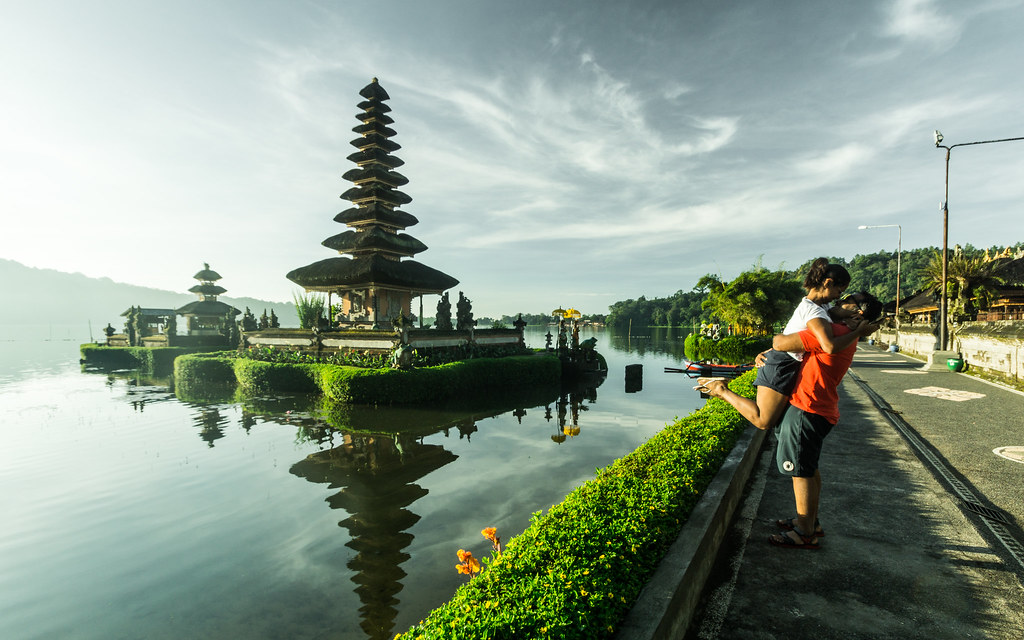 The mornings are pretty cold, it may not seem during the day but the temple is far away from the city and beaches and is surrounded by rice fields and hills. So, its always a good idea to carry a light jacket along, unlike us who didn’t carry any and I was in a sleeveless. It was 5 am with a bone-chilling breeze and the first light had just started to emerge. There was no one else around, not even the devotees and we saved the entrance fee too. The first light on the temple with a colorful sky above was simply out of my imagination. It was an amazing time to spend together and it was worth killing my sleep. As the sun brightened people started pouring in and we took a leave to another beautiful landscape.

Getting around the beautiful rice terraces of Ubud 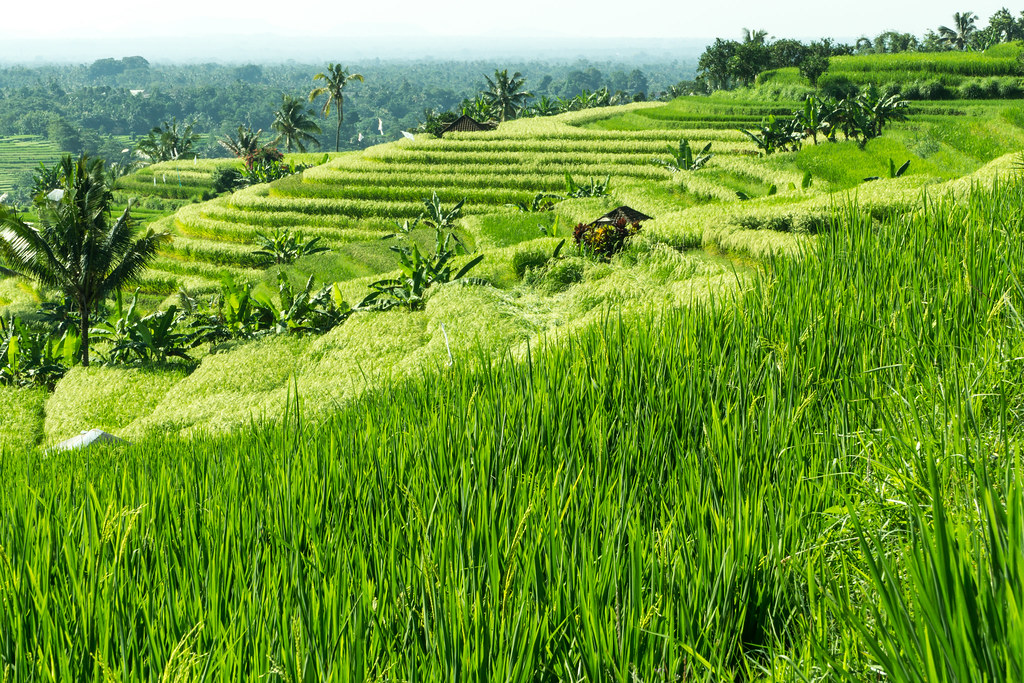 Ubud is well known for rice paddy on terraces. The road is through the villages with unique architecture and development and is sure to amaze anyone. As we rode further West from the temple, green paddies on terraces emerged. Rice terrace is not something very common in India. I being a landscape lover, rice terraces were something to be excited about but was hard of any difference to Priya. Obviously, she was seeing it as just another place with bright green grass. As I started framing pictures with the beautiful houses on the top of the rice terraces, all my excitement started making sense to her. The roads around the rice terraces were yet to see the tourists as it was pretty early when we reached. Very few people go beyond the temple and not many of them make it early which was in our advantage to wander around less the crowd. 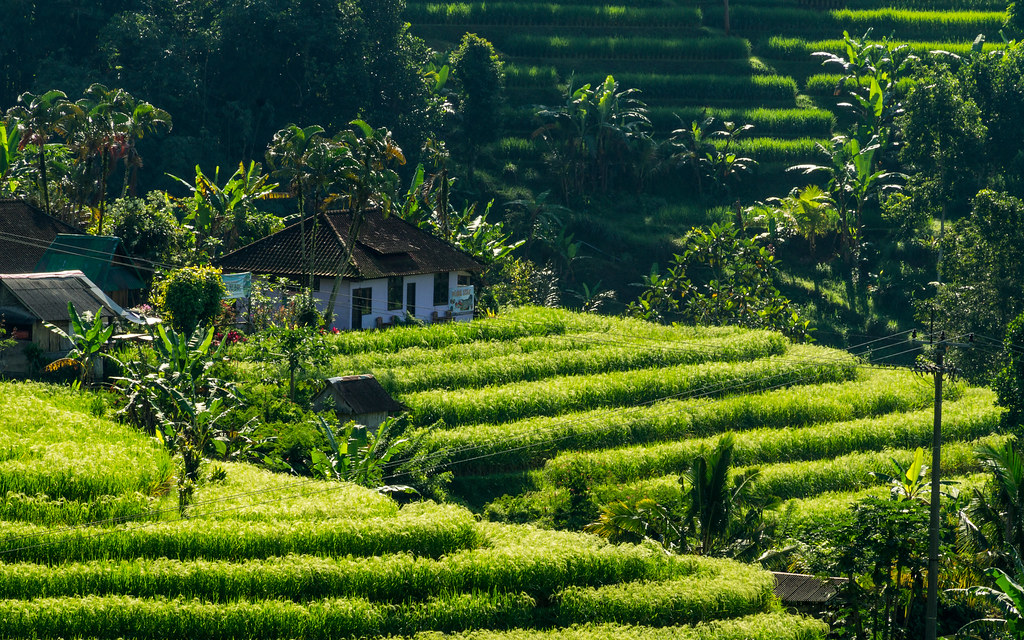 There’s no one way to reach a place of interest in Bali, we didn’t take the same way to return that we used to arrive here, rather we kept following the road till end and the rice terraces would just not end. The road goes through the forest to join back to the highway. By 11 am we were back in our hotel rooms, just when the day had started to warm up. We took the rest of the day off by sleeping.