Yes, I went on a hunting trip to Bandhavgarh National Park and I was hunting tigers with my camera. While I was writing this story my wife Priya thought it was lame to title my story such, but do not take me literally and I love nature. It was supposed to be a surprise from Priya for our anniversary.

Priya had everything meticulously planned but could not hide it from me for long. I fumbled upon the reservation mail from Taj Mahua Kothi in her emails. She had forgotten to sign out of our home computer. 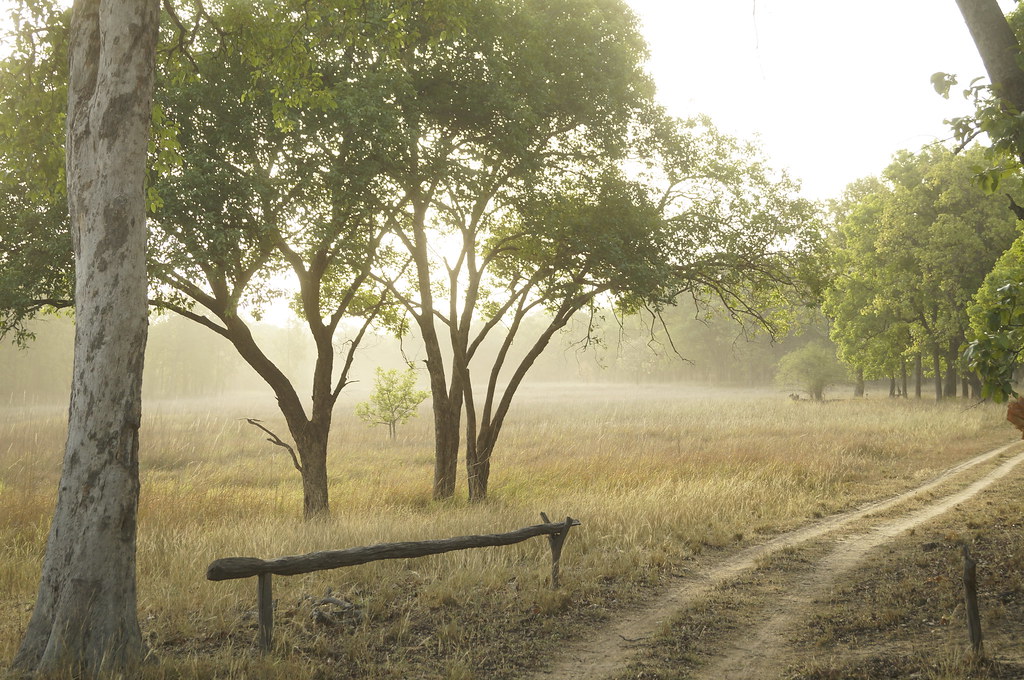 It was a five days safari trip to Bandhavgarh in Madhya Pradesh. The forest is divided into three zones, Tala, Magadhi and Khitauli. And to my surprise, she had arranged all 7 safaris in one zone and it was Khituali. Although the jungle is big and beautiful as Khitauli lies near the human habitat, it would be hard to track a tiger. This part of the jungle is great for birds, cheetah, and bear. It wasn’t only the animals but the landscape too varies widely across all zones. As Priya is pregnant she will greatly enjoy the hospitality of Taj but for me, it was the safaris and the surprise soon turned into a spoiler. 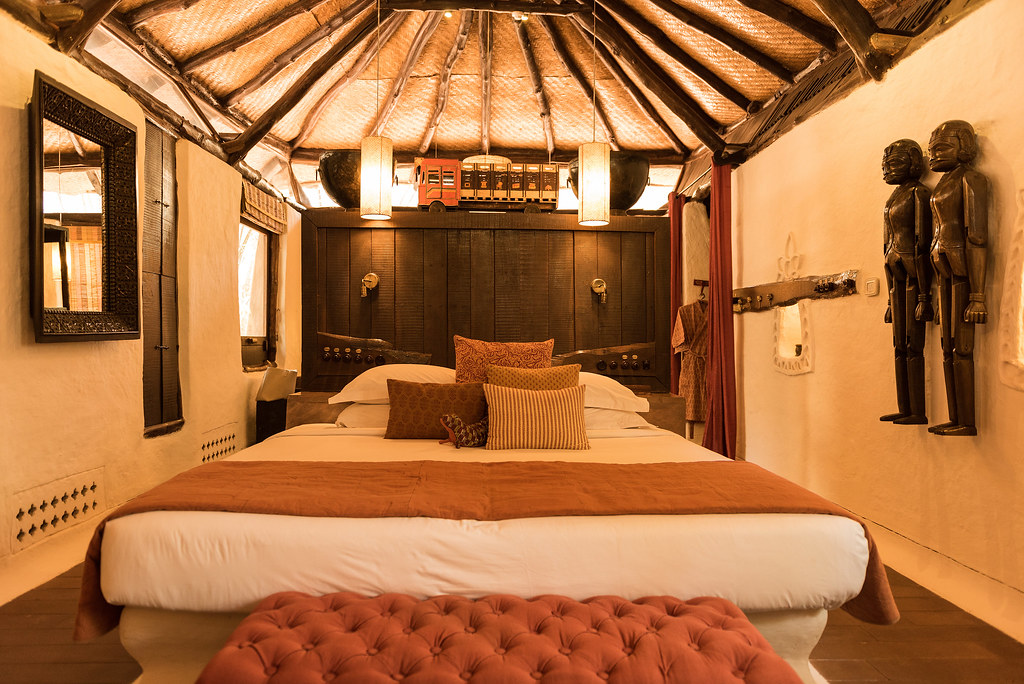 To reach Taj Mahua Kothi we took the Mahakaushal Express from Nizamuddin in the evening and arrived at Katni the next morning. It’s a 2 hours drive from Katni to Bandhavgarh, where the National Park is. We checked in during the lunch and were mesmerized with the beauty of the property. The resort is spread across a huge area, it was hot and the grass had dried up. Taj has done a wonderful job by maintaining the natural habitat rather than going for cosmetic landscaping in and around its property. So the property including our hut was surrounded by bamboo trees and dried leaves. 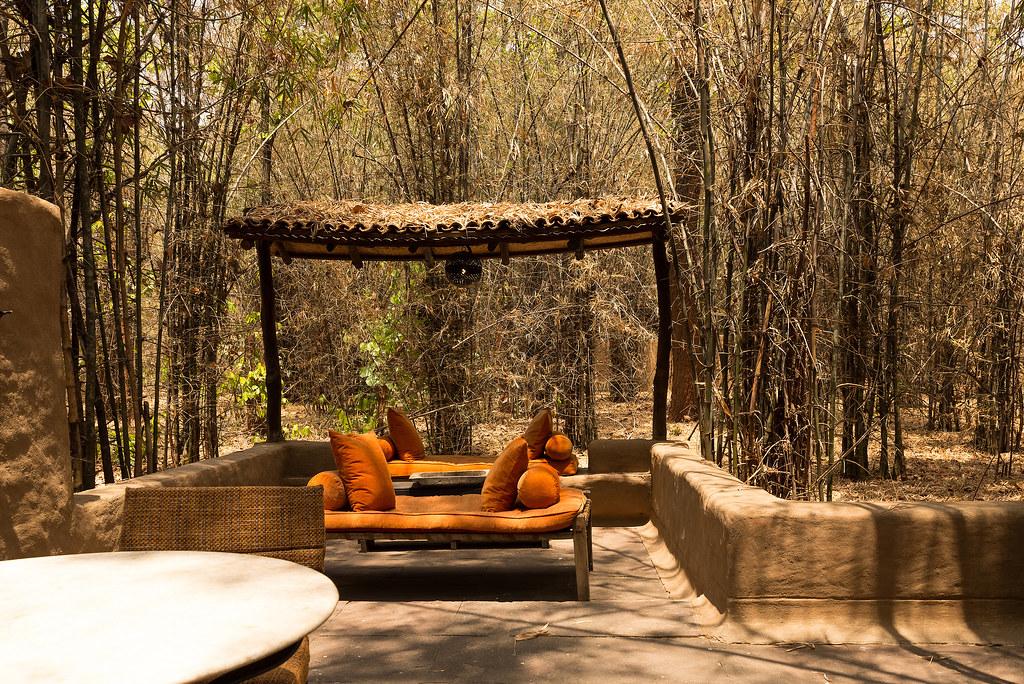 We quickly headed towards our room as the journey was exhausting, we took the train so that I could make it to my first evening safari. We had a wonderful lunch and it was unexpectedly fresh unlike where other hotels prefer precooked food. While we were having lunch, to add to the spoiler I got to know that recently there was a forest fire in the Khituali zone. Although I had requested the Taj’s booking team to fix me in other zones it seemed like a distant dream.

My first tiger safari in Bandhavgarh 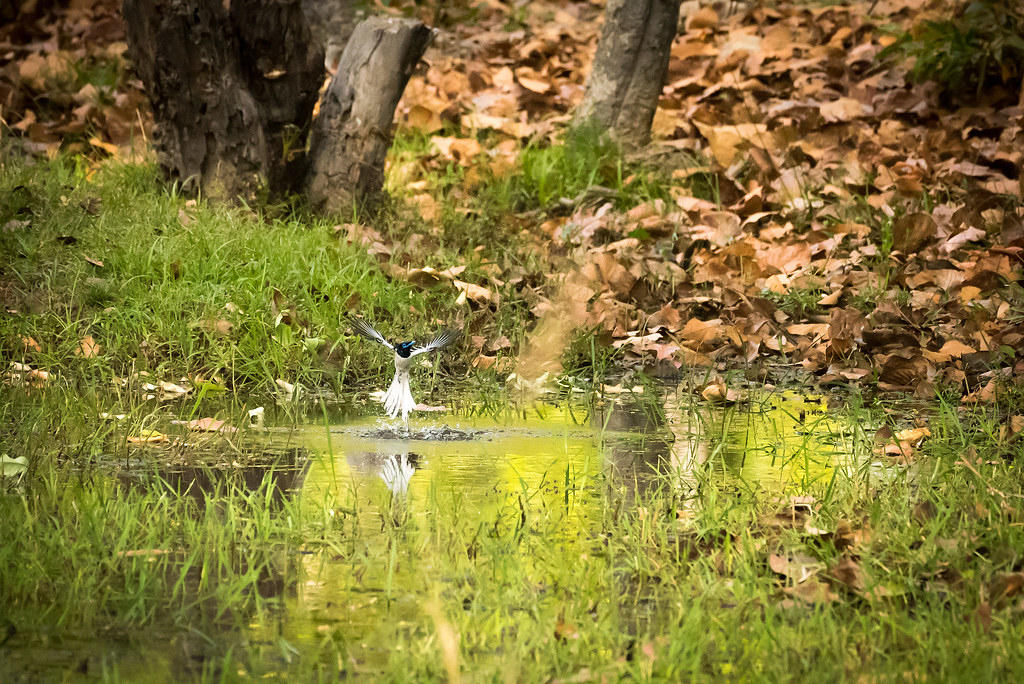 This wasn’t my first trip to Bandhavgarh but it was my first safari with Taj Safaris in Bandhavgarh. My first safari was at 4 in the same evening we arrived but the Taj team were kind enough to clue me with another guest in Tala zone and they managed to get a big smile on my face. I was excited for my first safari as the rest of the safaris were in one zone. I had my hopes very high and was hoping to get my dream shot of the tiger. Summers are when tigers come out to hunt the most during the whole year. During summers they get themselves easily camouflaged in the dry grass. 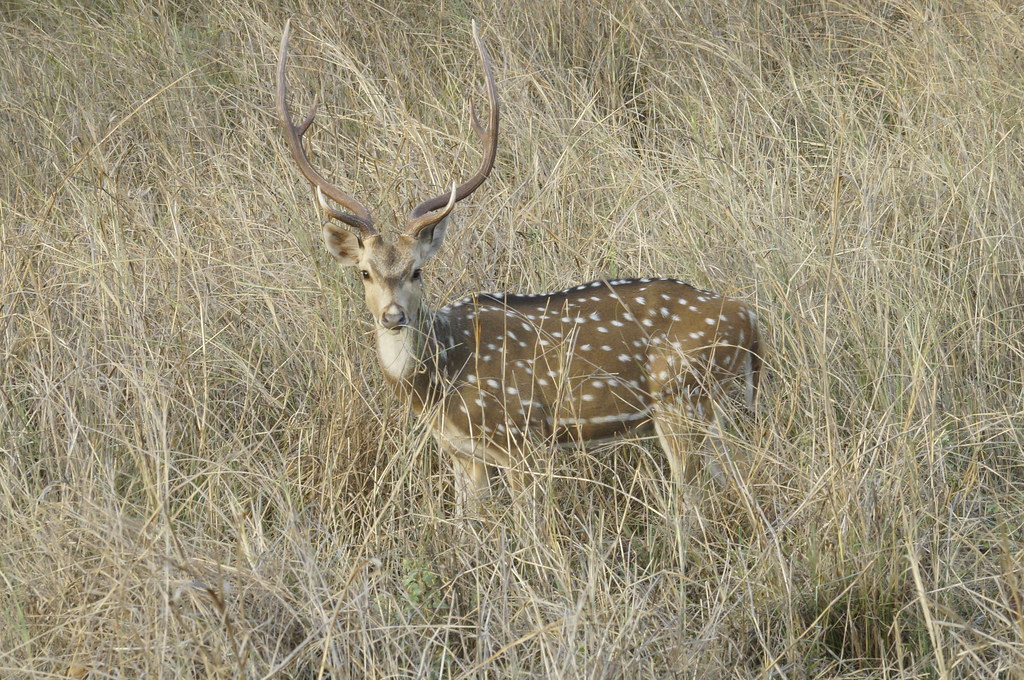 Tala is mountainous as compared to the other zones. I personally do not have a preference for a particular zone or a national park but I like to increase my chances of confronting the big cat in my safaris by covering a bigger area of the jungle. The first evening safari wasn’t the day when the tiger would give me a visit. I strongly believe that the difference between seeing the cat in an enclosure and in the wild is the difference of visiting a zoo to see the cat and the patience to get visited by a tiger in the wild. Tala has a very beautiful and varied landscape as compared to other zones. We waited at several watering holes and streams that fell in the territory of different tigers. Our safari guide and the naturalist from the Taj hoped to find the big cat but it was all in vain. Though I did not get visited by the tiger that evening I enjoyed the landscape, a beautiful sunset, and the jeep ride.

Tracking a tiger is like the austerity of Yogis 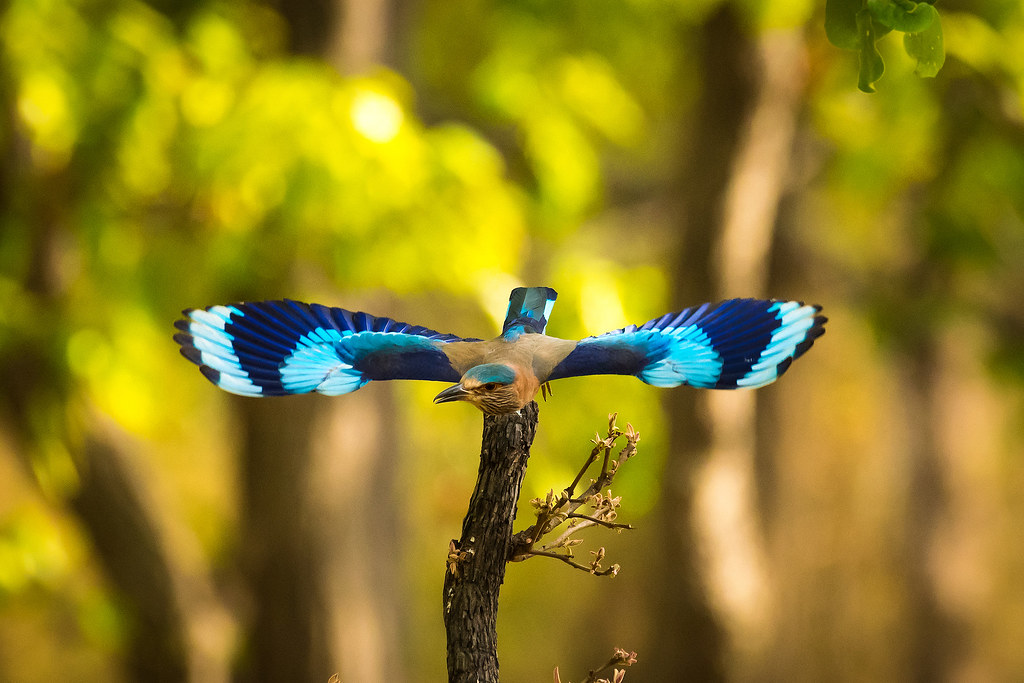 Rest of my safaris were in Khitauli zone, the day before I was lucky to accompany co-guests to Tala zone but that was the last safari of their trip. I got up early in the morning the next day as the safari was starting at 6’o clock. When we entered the zone, I could figure out the extent of devastation caused by the forest fire. There was no way I could even spot a single species other than us in this burnt forest, was what my first thought and my heart sunk to it. We spent most of the morning looking for the tiger in a dead forest, where there was no prey for the tiger and no grass for its prey. But I was being accompanied by a very active and talkative naturalist from the Taj and to my surprise, he was a very good bird tracker. So there it was, I could either spend all my trip engulfing myself in the disappointment of returning without shooting a tiger to making use of my naturalist to track birds in action.

After all the jeep rides in a single zone in Bandhavgarh, where I thought everything was dead, my naturalist showed me another side of the jungle and how life thrives even in dead jungles. The birds seemed to make the most out of the little water logs. A handful of deers, langurs and tiny birds were all that was left of this jungle. They seemed to be free of their concerns as they had nothing to fear. And my naturalist was very active in spotting a lot of small birds in action and even a pied kingfisher fishing. 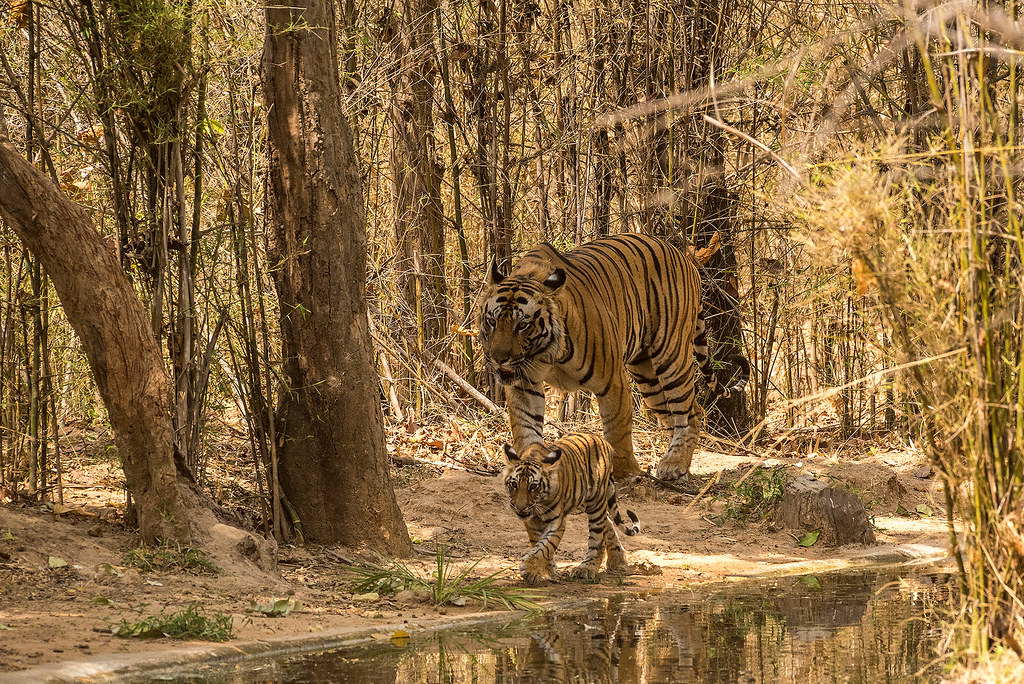 After six safaris in the same zone, morning and evening, I was least bothered about my disappointment of going back without my dream shot of the tiger. Although we had a glimpse of a tiger resting near a small pond in Khitauli but having to encounter a tiger face to face seemed far away. The team had managed to pull another pass for me for my last safari in the Magadhi zone. It was a wonderful feeling and I was very proud of the team who took the pain to arrange the pass. I could only imagine how difficult it would have been to get the pass when there are only limited passes for the public and that get sold out months before. This is one of the reasons why I utterly love Taj hospitality, their generosity, and kindness. 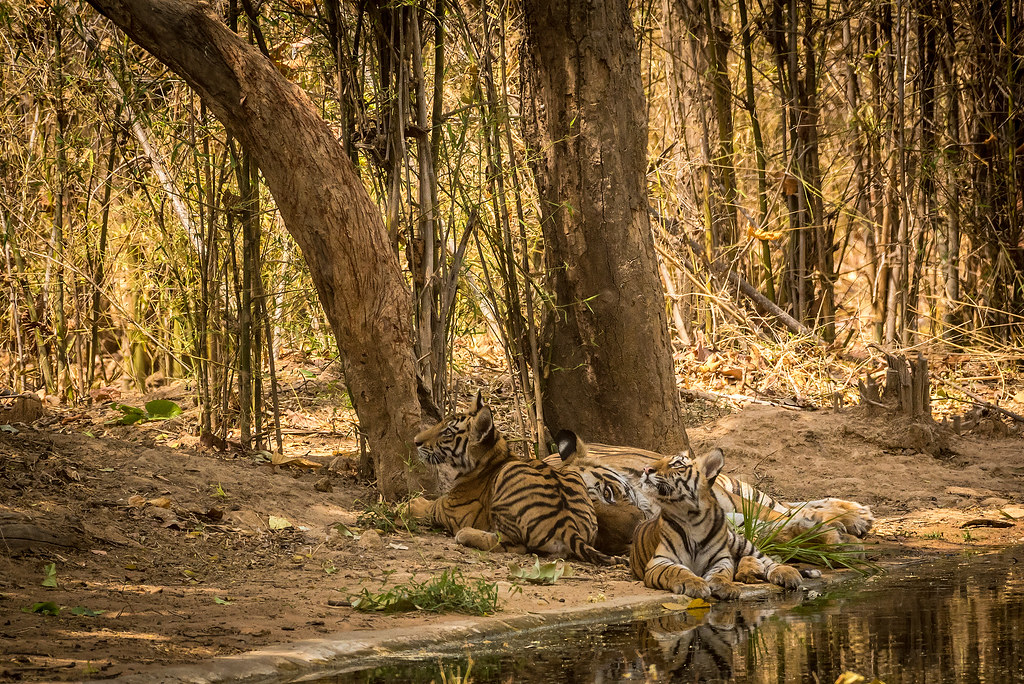 The last safari was a special one and this time I did not get my hopes very high and this safari was going to be the most memorable one. As we entered the park we got the news from the rangers that Spotty (a female tiger) with her cubs was around a man-made watering hole since yesterday. We rushed to the watering hole and so did others. There was a big pile of jeeps waiting for the Tigers to give a visit. We thought of taking a ride in the jungle as it was quite early for the Tigers to come out and quench their thirst. There was a good chance to see a tiger in the open and which we did. Soon after we had our breakfast in the wild, which the Taj safari make it special every day, we rushed back to the watering hole. We waited with patience and after hours there it was, a litter comes and jumps into the pool. And following him, there were two others and their father. We spent an hour watching them play in the pool. This one moment is what made my trip to Bandhavgarh memorable. I hope when you plan your trip to the land of Mowgli you too find your moment of joy.